First an email from the Howell Collective, the group behind the new park and p-patch at 16th and Howell (no website yet, but I'll share as soon as it's up):

The last month and a half the Howell Collective was waiting to hear the outcome of the Neighborhood Matching Fund grant. The results are in, and we have been awarded a match of 15k towards our garden project on 16th and East Howell! We are still looking to expand our steering committee, as well as seek assistance and advice in many areas! [consulting from a landscape architect, building experience, master gardening experience…]

We will be at the Broadway Farmer’s Market this Sunday, November 15th, to share the news and provide more information to the curious.

Thank you for all of your support. 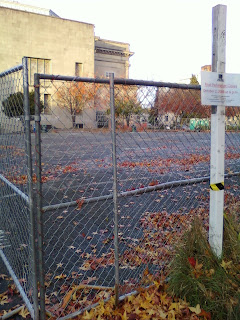 Secondly, as you may know, PPL appreciates work that lies at the intersection of politics and art, and especially when it is displayed in public. Hence, this photo: 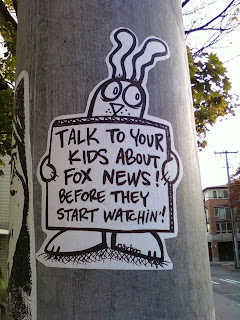 And lastly, a late autumn shot of the lot: 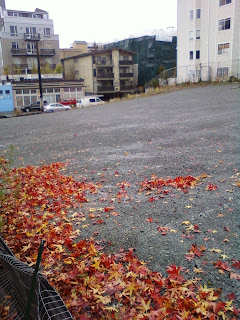 No big plans right now for events but we have a grant app in for Park(ing) Day 2010 funding. However, lots of ideas are bouncing around, ranging from further work with signaltonoise, to setting up a documentary screening in a disused space, to finding a way to use the now closed T.T. Minor elementary school.

*UPDATE*
I also just received an evite to Feet First's Central District Safe Streets Showcase Event Looks like a good time; you should go.
Posted by Keith at 4:30 PM No comments:

In case you needed another reason to stop by Spine and Crown on Capitol Hill, here's a comment Kris left on CHS yesterday regarding indie book stores:

First a shout out to the late, lamented Confounded Books (formerly sharing space with Wall of Sound Records.) Zines, indie comics, books, artsy and hipster fodder - no one has filled this niche- it was a place that made Seattle feel more cosmopolitan and so a double loss.

As for the end of book shops (shops dedicated to selling books - not corporate media stores selling a smattering of what's currently in print alongside DVDs, CDs, blank journals, coffee, internet kiosks, tote bags, magazines, etc.), the check is in the mail. I run Spine and Crown, and I can tell you that independent book shops stay open through sheer will power, a very little money, and nothing else. If will or money falter, the shop is gone.

Yes, books will still be around in the future, as will booksellers. But don't confuse the phenomenon of the book shop with the phenomenon of the book trade. The book trade, thanks to the internet, can now continue happily on without shops. I sell a lot online. In fact, I would make more money if I closed my shop. And it's not the economy - my through-the-door trade has rarely ever exceeded my rent and often fell under it. So what keeps it going? Will power. The belief that a book shop has an important role to play in a community. But it won't take many more bumps in the road for us to go the way of Pistil. I often think of them with envy. They travel, and I think I've seen Sean and Amy having fun once or twice. I work 6 days a week and can't afford to get away. (Poor me! Could be unemployed, like everyone else!)

So. Bookselling will always exist (catering to an ever smaller, aging market), and book shops may always exist - but very few will in cities. Not unless rents come down (around the time pigs fly) or we find landlords more concerned with culture than profit (not unheard of, but rare as hen's teeth.) Book shops will NEVER be able to pay Starbucks money for a retail space. Given the prospects, I see running a book shop primarily as a big middle finger aimed at all the trends in society worth opposing. But it's mostly that: an impotent gesture.

And while I'm at it, what no one wants to acknowledge, but that booksellers seem to understand well is that few people actually seem to LIKE reading anymore. I cater to the hardcore reader, the person who would buy books even if it meant they'd go hungry. There used to be a lot more of these people. Most of the money in the book trade today is made selling middle of the road, middle-brow stuff to a sleepy majority who read half a dozen books individually per year. These people can take or leave reading. They'd be just as happy on their xbox or watching a movie. Happier, even. Business-wise, I don't care about those people. I don't care about their books.

A way of life is passing - for better or worse- and most people won't notice until it's all over. Shoe repair used to be a really common business, back when shoes weren't disposable. One in every neighborhood. There are still a few around, so people, if they ever think of the topic, don't lament the widespread loss of these shops. The shoe repair trade is only vastly diminished, not extinct. It's not considered a tragedy because circumstances simply changed - shoe repair became mostly unnecessary. Welcome to the future of book shops.

I put this post up in a hurry without relating my connection to the store. Kris came to the Capitol Hill Garage Sale at the lot back in June and was totally psyched that we had organized it. On the spot he offered his store as a meeting place if we needed a place to talk about future events. He also donated a stack of books on gardening and green living as a prize for Park(ing) Day, plus came by to hang out for while. So while he may not carry the latest volume of Sue Grafton's work, but he more than likely has something on his shelves that you want to read (or, at least, should read).
Posted by Keith at 11:54 AM 1 comment:

Reminder that Alex Steffen of Worldchanging will be speaking at Town Hall next Wednesday and Thursday. Come hungry because Skillet will be there too!

Here is the facebook invitation if you're in to that sort of thing.
Posted by Keith at 1:11 PM No comments:

No events are currently planned but let me know if you have an idea for something. With the weather changing and the academic year in full swing, I'll mainly be posting information about news and events that I think will interest readers of this site. Please get in touch if you would like to share something.

As an Associated Program with Shunpike, People's Parking Lot is now able to accept donations from the good people of the internet. Our events are all planned and executed by volunteers so every dollar counts. So if you're feeling generous and would like to put a few dollars toward next year's Park(ing) Day (for insurance, sod, supplies, etc.), it would be greatly appreciated!