Not exactly related to the lot but the rally and march are in the same spirit of what I'm going for.

Click here for story.
Posted by Keith at 2:03 AM No comments:

Writing on the seeds of the Protestant Reformation in 16th century Germany, Jacques Barzun examines the forces behind revolution. And while taking community action at the lot is far from revolutionary, it shares both the "event" and "resonance" that make public uprisings successful.

I'd like to think that my making of the video was the event that spurred the action but that's not the case; perhaps it was a rough draft of a preliminary pre-event?

Luther's mythical nailing of his 95 theses to the door of the Catholic All Saint's Church was an authentic event and it was followed by resonant action by the masses. In From Dawn to Decadence, Barzun writes that various people find reason to participate in such action, namely:

ardent youths full of hope as they catch the drift of the idea, rowdies looking for fun, and characters with a grudge. Cranks and tolerated lunatics come out of the house, criminals out of hideouts, and all assert themselves.

This passage strikes a chord with me because of the diversity of stakeholders -- to use contemporary planning vernacular -- that are and will be affected by whatever happens in this space. Young, old, gay, straight, lifelong residents, newcomers, students, employees, transients, hipsters, yuppies, hippies, property owners, developers, dogs, etc. stand to benefit or lose when something (or nothing) happens here. Uniting this diverse population is the task at hand.

With that said, I'm working on using the lot as a legitimate "community garage" space for the Second Annual Capitol Hill Garage Sale. If you have any experience organizing events -- specifically working with indemnity and liability -- please get in touch so I can further educate myself on the specifics.

And if you're more of the revolutionary type and are planning on storming the lot, setting up camp and making noise, then more power to you. On that note, has anyone reading this site been involved with Critical Mass or with the flash mob pillow fights?
Posted by Keith at 1:29 AM No comments:

A bit sooner than I previously anticipated. 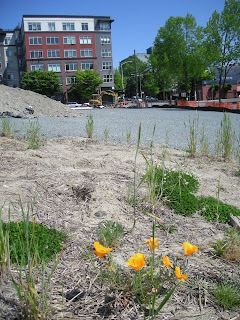 And there were butterflies too: three to be exact. Unfortunately neither my camera, photography skills, or patience are of a sufficient caliber to have documented them. 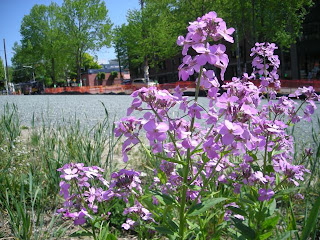 Click photo to expand and read about one artist's take on that truck stop parking lot subculture of which you may or may not have heard...

Image source and description here.
Posted by Keith at 4:11 AM No comments:

A headline about this phenomenon popped up through the NPR feed on my Facebook page. In short, Slacktivism is pretty much what I'm doing here: writing about social action online in lieu of actually doing something. Of course, the intent of this site is to organize/inspire folks to take action but that doesn't exonerate me. I've been trying to avoid this pitfall and even wrote about it (scroll down to the subtitle "Public Technology") last autumn in a course I took at UW, but I'm not exactly succeeding. Anyway, the article is good and I hope you find it inspiring.

Also I would encourage any readers of this site to join the Facebook group for Hugeasscity. The author of the blog inherently understands our (meaning people, collectively) tendency to read and comment on blogs rather than, as Royal Tennenbaum says, getting out there and mixing it up. While you're on Facebook, go ahead and join the People's Parking Lot group too.
Posted by Keith at 3:17 PM 2 comments:

It has been a week since I've posted anything and I regret to inform everyone that I have no new relevant content to share. However, I did come across the parking lot dance scene from a movie called Step Up. Maybe you've seen it? Maybe we should re-create it?

Anyone have plans for the lot soon or want to make some? The BBQ corn and sushi guy emailed me and said that he still has plans for doing something, but nothing is set in stone.

Actually, I take that back, I do have some relevant content. Someone affiliated with Sustainable Capitol Hill emailed me last week and said an associate had mentioned something about a night market at the lot. My contact info was going to be passed along to the night marketeer, but I haven't heard anything. I've also been in touch with I Heart Rummage, and while they are too busy to organize an event, they said that I or others interested in gathering community support for a takeover would be welcome to set up at one of their events. Are there any IHR veterans or people-persons out there who'd like to collaborate on this sort of rabble-rousing?
Posted by Keith at 5:03 PM 2 comments:

Anyone know this guy? I'd like to talk to him but I know better than to disturb an artist at work. 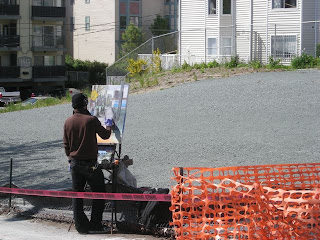 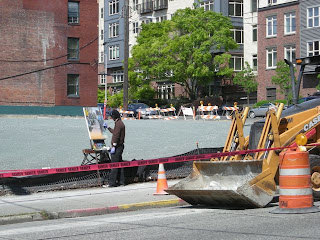 The only real problem I see here is that the lot isn't level.

In the summer of 2007, my wife and I stopped over in NYC for three days on the way back from our honeymoon. We walked out to the edge of Chelsea to see Frank Gehry's IAC Building:

It was hot and my feet were killing me (we had just spent a month in Spain where it was even hotter and where we walked even more), and I don't even particularly care for Gehry's work (though Sydney Pollack's film, Sketches of Frank Gehry, made me a little less critical); but, on the way back toward midtown, I saw a wall full of posters for Friends of The High Line. As an abandoned elevated rail line, nature had reclaimed this space, a la Alan Weisman's book, The World Without Us.

A nonprofit organization had formed with the vision of converting this space into a public promenade; they had garnered much support from the public and from design professionals. You can check out their website here to read more about the details and progress they have made.

And though our lot hasn't been here long enough for nature to have reclaimed it, I think we could just skip over that part and make it ours now.
Posted by Keith at 4:02 PM No comments:

A nice socio-politcal rant by Geoff Manaugh of BLDGBLOG fame, from way back in 2004. He specializes in "Architectural Speculation, Urban Conjecture, and Landscape Futures" so you don't have to take what he writes literally, but pondering it will be salutary.
Posted by Keith at 3:14 PM No comments:

Earlier this afternoon I was caught without my camera but I saw something wonderful. A gentleman had his easel set up on Pine and was painting the lot. I rushed back as soon as I could but he was gone. I'll return tomorrow and see if he's there but, in the meantime, if you know him, I'd at least like to see his painting.

Later I went to pick up a pizza at Olympia and was greeted by another wonderful sight; this time I had my camera. 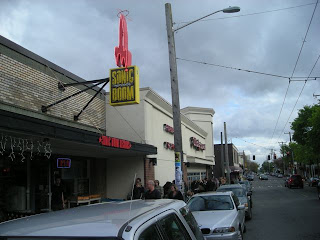 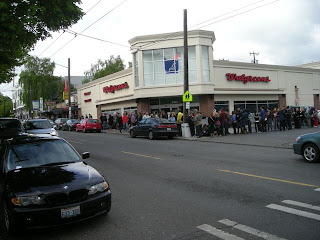 It turns out that Iron and Wine is playing an in-store at the Capitol Hill Sonic Boom before his show tonight at the Triple Door. Wish I'd have known earlier and I would be in attendance...but it got me thinking.

What if there was a show at the lot? Perhaps one with a local band who could draw a decent crowd and wouldn't care if it was, um, legal. I picture outlaws like Brent Amaker and the Rodeo or maybe another reunion show by The Murder City Devils. Any promoters out there know these guys or other bands that wouldn't mind a guerilla show? I guess the show could maybe be legitimate too, if it came to that...
Posted by Keith at 5:50 PM No comments:

As a drummer and a fan of farmer's markets, I have to say that I like this story from Santa Cruz, CA:
Posted by Keith at 7:08 PM No comments:

Today I noticed that some tree protection flyers had been posted on all the trees in front of the lot and on the same block across Pine. Additionally, I saw some outside of Bill's Off Broadway. 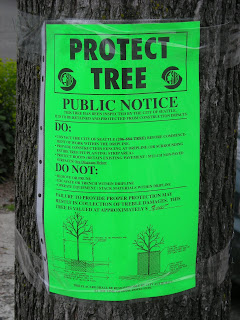 I also saw these worker types immediately west of the lot but didn't ask them what they were doing. Anyone know what sort of work is about to happen along Pine and if it involves the lot or the street itself? 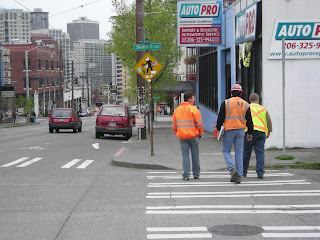 Do you or does anyone you know live at 1614 Summit ("The Parc on Summit" -- the gray building adjacent to the lot, shown here).

Update: I just contacted the property manager about using the south wall as our lightshow canvas. I'm not sure what her response will be but am hoping for some positive feedback.
Posted by Keith at 11:45 AM No comments:

A reader contacted me earlier this evening who has access to a projector that can be mounted on a van! I asked whether or not he has the van too (because if he did, we'd be unstoppable) and will post details when I hear back from him.

In the meantime, enjoy this video of the Uruk Videomachine, a French projection van:

I just received an email from a gentleman named Matt about his plans for the lot next week weekend. I'll post more details as I hear more from him.

Hello stranger. Next week(end) I will be serving barbecued corn and sushi on the vacant lot on pine in capitol hill. I saw your blog about the lot and thought maybe you would like to know. Que Deliciouso!
Posted by Keith at 3:55 PM No comments:

Looking back at the video, I noticed that the southern wall of the apartment building adjacent to the lot would be a perfect canvas for projection. If one were to project messages about taking over the lot on, say, a Friday or Saturday night, I would think many a bar patron couldn't help but notice. 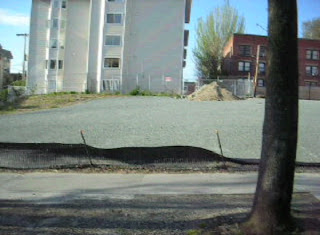 How to project messages remotely you ask? There's a tutorial right here. I have a laptop and a VGA converter but lack the projector or power inverter...
Posted by Keith at 2:00 PM No comments:

I've long thought that a little projection graffiti would be a good tool for criticism in the built environment. Specifically, I thought it would be great along the blank wall of the new Sheraton building downtown, but if there were a way to implement it -- either horizontally or vertically on the pine lot -- we could accomplish several things at once, like making the space more interesting for now and expressing our discontent where more folks would see it (and in the real world, not just online).
Posted by Keith at 9:01 PM No comments:

No events are currently planned but let me know if you have an idea for something. With the weather changing and the academic year in full swing, I'll mainly be posting information about news and events that I think will interest readers of this site. Please get in touch if you would like to share something.

As an Associated Program with Shunpike, People's Parking Lot is now able to accept donations from the good people of the internet. Our events are all planned and executed by volunteers so every dollar counts. So if you're feeling generous and would like to put a few dollars toward next year's Park(ing) Day (for insurance, sod, supplies, etc.), it would be greatly appreciated!